Researched and Written By Karen Rieser

“This History Belongs To All Of Us”

Normandy, France, holds a special meaning for Joseph.  Since 2013 he has made yearly visits. His recent travels have included his wife, Stephanie. During these trips, he has visited the many memorial sites acknowledging the United States, Canadian, French, and British troop efforts in Operation Overlord. Operation Overlord lasted nearly three months, culminating in the liberation of France from the Germans and advancing through Europe, ending World War ll. 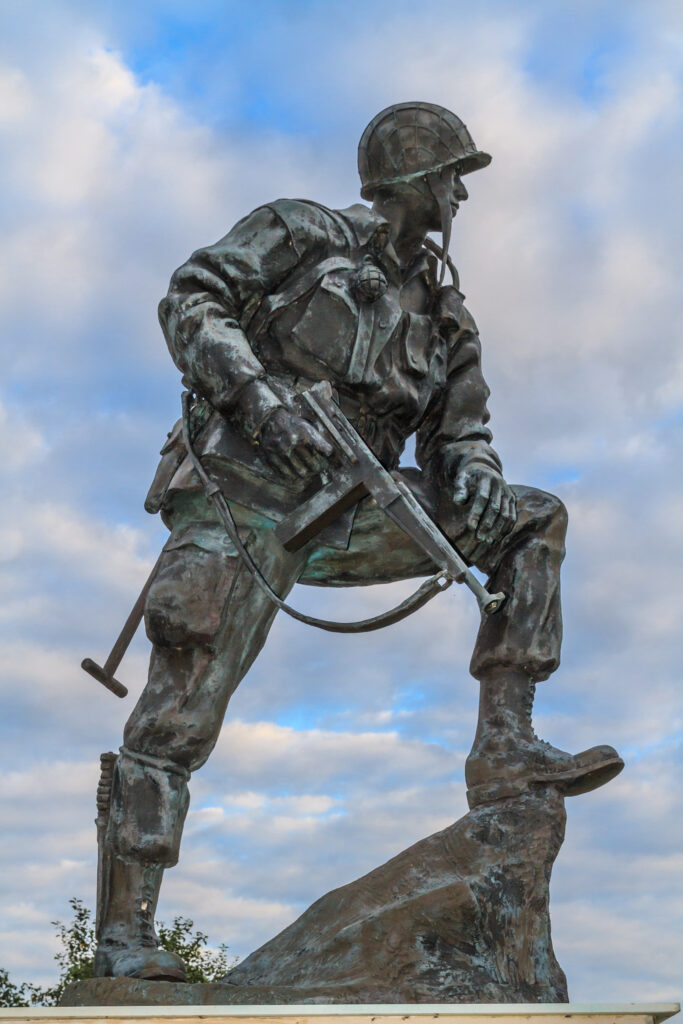 Normandy’s number of museums, memorials, and monuments honoring those known as the ‘Greatest Generation’ seems endless.  Naming just a few: The U.S. Navy Monument, Omaha Beach Memorial, Utah Beach Memorial, Normandy American Cemetery, Garden of the Missing, Normandy Beaches, American Cemetery and Memorial, and the Comrades Forever Memorial. There are so many monument sites that it is prudent to contact a travel agent for information and get you from here to there.

As a scholar of European World War II history and a frequent visitor to Normandy and its many memorials and beaches, Joseph has recognized an omission in the story. Where is the monument honoring the French Resistance?  There are plaques found around France telling an individual story here and there, but no monument for the resistance’s role in liberating France and ending the war. Joseph and his team hope to rectify this.

Why the French Resistance?  What exactly was their role in WWll that earned them the privilege of a memorial? We must look back into history.

June 1940 marked the time the Germans took France. This unbelievable event led to a relatively unknown Two-Star General, Charles de Gaulle, escaping to Britain. De Gaulle refused to submit to occupation and continued to press on from afar, leading the Free French Forces against Nazi Germany. On June 18th, 1940, in a speech from Britain, de Gaulle refused to acknowledge the Nazi Germany occupation and called for the French military and citizens to resist the takeover in any way they could. Post-war, de Gaulle’s speech was considered to mark the birth of the French Resistance.

Ruins of houses destroyed by bombardment in the second World War

French man and woman fight with arms taken from the Germans in Paris, August 1944. After Allies defeated the Germans in Normandy, Parisians revolted against their Nazi occupiers.

The resistance was made up of ordinary citizens from French society,  academics, students, aristocrats, conservative Roman Catholic priests and nuns, Jews, and liberals. The secret community began with a few and grew to many. In the early days, the resistance was referred to as the Maquis (the name of a shrub found in the area they met) and its operative’s Maquisards. They consisted of small unrelated groups of people meeting all over France to support the Allies by interfering with the German occupation. By D-Day, the Maquis, having grown in number and ability, were organized into paramilitary operations units that were provided information and weapons. They were now referred to as the French Forces of the Interior or FFI. At the end of the war, 220,000 French people were acknowledged by the French government as members of the FFI.

In the early days, the Maquis began by aiding Allied prisoners and soldiers to escape the Nazis and provide Jews with safe-havens. As time progressed, the FFI became the ‘irregular soldiers’ of France.  Some tasks performed were providing the Allies with German military intelligence, performing acts of sabotage, interfering with electrical grids, all forms of transportation and telecommunications, writing, printing, and distributing underground newspapers, and maintaining escape routes for Allied soldiers and airmen caught behind enemy lines.

Before, during, and post-D-day operations performed by the FFI were in the thousands. On D-day, to support the landings on the beaches of Normandy, seven individual operations, each named for a color, were planned and executed by the FFI. The first, Plan Verte, set out to sabotage the railway system, Plan Tortue destroyed the road network, Plan Violet destroyed the phone lines, while Plan Bleu destroyed power lines, Plans Rouge and Noir attacked German ammunition dumps and fuel depots, and German Command Posts were attacked during Plan Jaune. This was a tremendous undertaking requiring both bravery and expertise.

It would indeed be a privilege to have the opportunity to formally honor the perseverance, bravery, and determination of the French citizens of the FFI. Therefore, it is fitting that a monument honoring the French Resistance, a.k.a. FFI to stand among the other honorees in Normandy.

This is the goal of Joseph and his team. In the words of Joseph, “It is on us to make sure the story gets told.”  To do so, the artist-sculpture Steve Spears has been commissioned to create a monument representing the FFI.  Having done other works honoring wartime efforts in Normandy (the memorial to Major Dick Winters and the U.S. Navy Memorial on Utah Beach), Mr. Spears understands the history and passion of this assignment and has designed a brilliant display.

The monument will exhibit three arms of the FFI, the Guerrilla, the Underground, and the Auxiliary. The Guerrilla arm of the organization is represented by a gentleman holding a Sten MKll gun, passing a message onto a young woman. Sitting on a Calvados barrel (calvados is a cider brandy beverage representative of Normandy), the young woman honors the Underground as she sends or receives messages using a SOE communications radio. A young boy, signifying the Auxiliary, leans against his bike carrying a carrier pigeon in the basket, passes a message to the woman for coding. The display exhibits history in fine detail and evokes deep-rooted emotion.

An organization, The French Resistance-Call to Action has been created to move the story of the FFI from a concept to its three-dimensional form. Now massive support is needed. In the words of Helen Patton, General Patton’s granddaughter, “Now is our chance to honor those who were there with us and for us.”

How does one fulfill  Helen’s request?

Go to: www.FrenchResistanceMonument.com  to learn, honor, and if you can donate to this noble cause.

On June 6, 2021, in Sainte-Marie-du-Mont, the dedication of the long-awaited memorial statue to the French Resistance occurred. Viva la memory of the FFI. 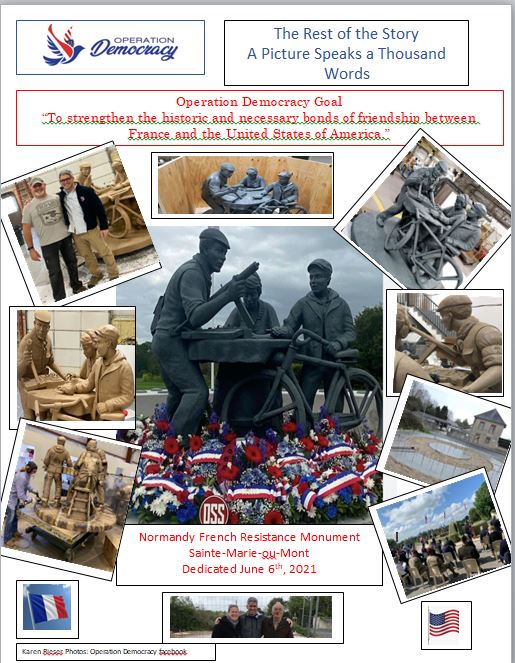 This video featuring Joseph tells more of the story. 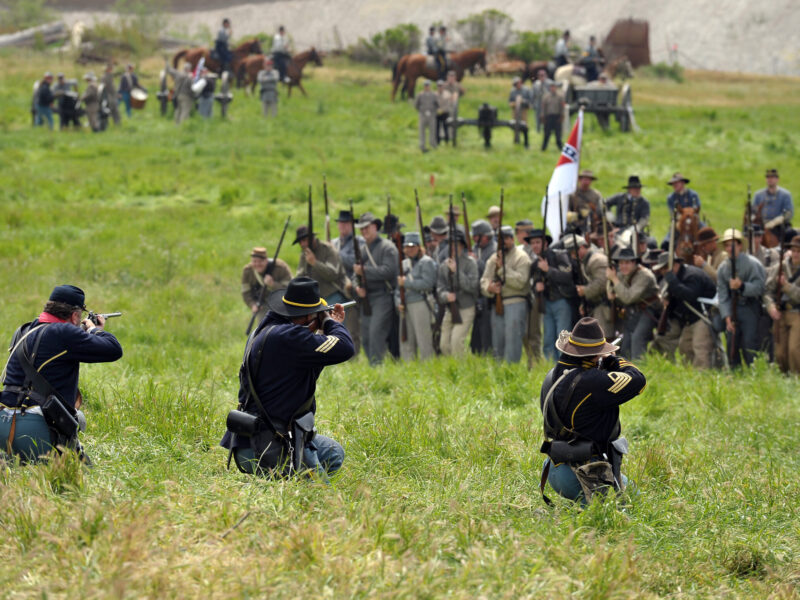 History of the Civil War 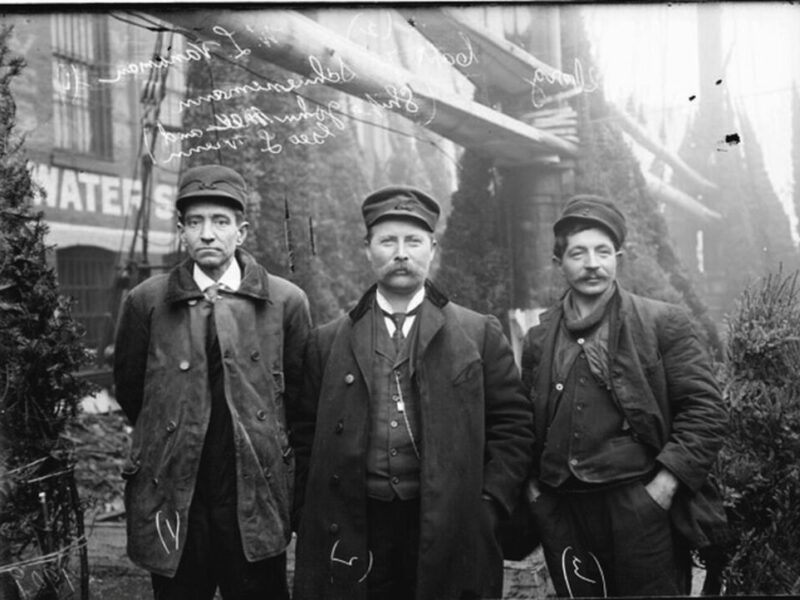 Captain Santa and The Christmas Schooner 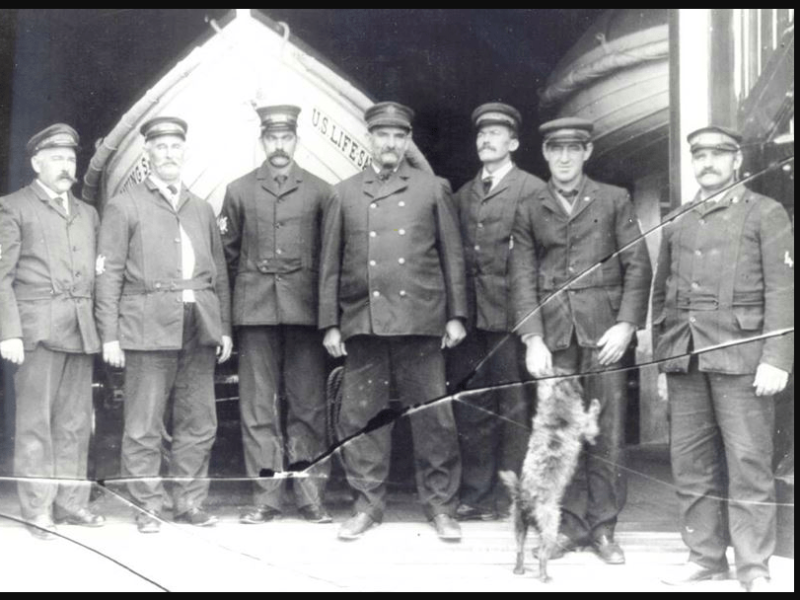 The Great Lakes and Me – Stories of U.S. Coast Guard Ancestors